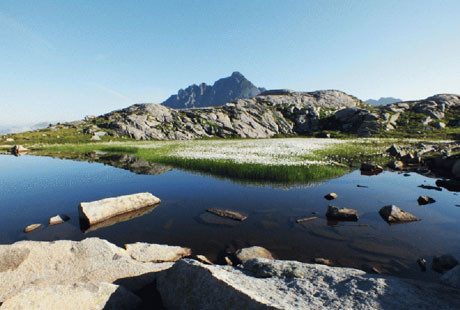 The section G.I.A.N. of Saviore of Adamello was founded on July 1,1987 by Marinella Gabelli and Italo Bigioli. In a small house bought from them in the historic part of the town,capital of their province,they went through an experience based on a fundamental approach:the soft tourism to be understood as immersion in the living nature and action in defense of ecological stability.Concept that could be fully logical specially in a place very attractive like Saviore of Adamello in terms of natural scenary,with its natural values well preserved to the possible extent and not altered by tourism.The beginning of this adventure was not easy at all.The attendance of members in a small village until then not used to external visitors was soon matter of contention in the local community and eventually led to the closure of the house.Far from putting an end to the experience this event reinforced the determination of carrying on the project as it was conceived at the beginning.In fact,Wolker Ebent,one leader of Naturfreunde of Baden-Wuertemberg,while visiting Saviore,wrote a letter to the Administrative Court of Lombardy region to reiterate the fundamental principles and the social objectives of the houses of the friends of the nature and consequently to blame the unfortunate decision aimed at preventing the functioning of one of them. After a little while the victory obtained with the court order to reopen the house had a positive impact on the community as whole,bringing a development perspective and the enhancement of the mountain area.Of course much time and much energy were needed to demonstrate the existence of a space where an economy linked to soft tourism could be built and the importance of Adamello Park role as instrumental in joining a national and international network could be relaunched.The first commitment that made the section directly active and able to inspire and to support the Valcamonica associations was in defense of Val Salarno,one of the largest Adamello valleys,from a pernicious project of road asphalt.The section G.I:A.N. grew in membership and attendance and so in 1994 was launched the campaign”A Park for Europe”with the participation of all environmental camun associations.Year 1995 was of critical importance for the section functioning:to the President of the European Parliament,Klaus Hentsch,6711 signatures were submitted by citizens demanding the creation of a large natural park in the central Alps through the union of six sizeable natural areas and of great cultural heritage represented by the “Rocky camun sanctuary”.The meeting with Ola Cassadore Davis and Michael Davis, representatives of the Apache San Carlos ,opened eventually the way to a in depth analysis on the topic of sacred in nature.Still today the representatives of Lakota-Sioux people and our friend Geshe Lha Tenkiong,medical doctor and monk from Tibet,are involved in some activities carried out by the section.

Activities carried out by the Section

The activities of the section of Saviore followed the original inspiration of the founders of NFI (Naturefriends International) whose slogan was: “BERG FREI!”
“MOUNTAIN FREE!”The Saviore section puts in practice this slogan through a constant commitment to the defense of the natural balance, biodiversity, wildlife, authentic mountain culture which that biodiversity promoted, defended and multiplied over the centuries.
Some of the activities carried out by the section are: