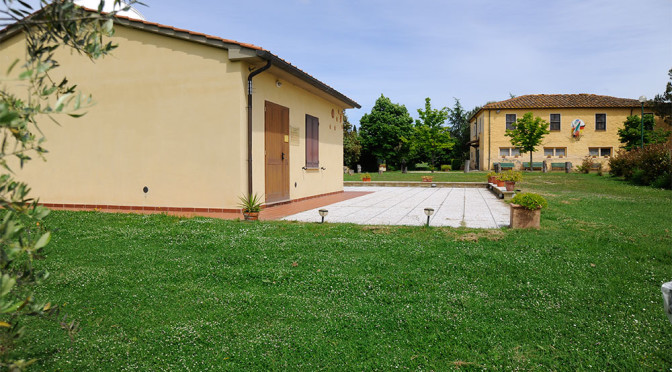 The Section G.I.A.N. of Volterra has at its disposal a holiday home surrounded by nature, called ‘Il Vile’, near the city, a few minutes from the village of Mazzolla and only 60 minutes from the sea. The purpose of the Section is to encourage ‘sweet tourism’ and in fact here guests are in close contact both with the natural environment that surrounds it, both with the starry sky of rare beauty. The location of the house is quiet, panoramic and the whole property is surrounded by green protections so that children can play in a protected environment.
The house is self-managed, ie during their stay guests use the structure independently, according to their needs but always in compliance with internal regulations. Guests can prepare their meals in the large and well-equipped kitchen and are responsible for the daily and final cleaning of the house. This means that you can access a tourist facility surrounded by greenery at low cost, where you focus on the social aspect of being together, playing, cooking and eating with friends, etc.. In addition to the beauty and tranquility of the place is also the recognized hospitality of the members of the section, always ready to welcome with friendship all guests and assist them with any need. There are rooms with 2, 3, 4 and 5 beds, for a total of 28 beds. For the overnight stay it is necessary to bring your own towels, kitchen towels and sheets. It is still possible to rent sheets on site with a contribution of Euro 3.00 per person. There is a common bathroom on the first floor (the one that houses the rooms) and common bathrooms/showers on the ground floor. Guests can use a Wi-Fi connection.

Volterra is located in a strategic position between the Metalliferous Hills, where it stands at an altitude of 531m. It is located in the heart of Tuscany, just an hour’s drive from the most important Tuscan cities (Pisa, Florence, Siena and Lucca). Lucumonia Etruscan called Velathri, was formed around the seventh century BC and around 260 BC was forced to submit to Rome, which became the municipality. In 67 A.D. a Volterrano was even elected to the papal throne, San Lino, and throughout the Middle Ages the city remained an important bishopric.

In the thirteenth century began the construction of the Palazzo dei Priori, still the symbol of Volterra and the first town hall in Tuscany, along with numerous tower-houses still visible. Volterra was ready to become a powerful municipality, and then a seigniory, almost always independent of the powerful neighboring cities. But the seventeenth and eighteenth centuries were rather difficult periods for the city, which although part of the Grand Duchy of Tuscany was subject to economic crises, plagues and drought: the only positive notes the processing and trade of alabaster. In the following centuries this trade, together with the industrial development of salt production, allowed the city to enrich itself with the construction of new roads and even a rack railway line, which remained active from 1912 to 1958.

Today, although salt and alabaster are still characteristic products of the city, the local economy is essentially based on tourism. Countless are the testimonies of thirty centuries of history, including the cyclopean Etruscan walls and medieval walls intact, the gates to the city, the Romanesque Cathedral with the Baptistery of San Giovanni, the Palazzo dei Priori in the square of the same name, now the seat of the municipality, the Medici Fortress, the remains of the Acropolis and the park ‘E. Rivers’, the Roman Theatre, the various sources and all the masterpieces contained in the museums of the city: the Guarnacci Museum, the Civic Art Gallery and the Diocesan Museum of Sacred Art.
In the beautiful setting of the historic center are numerous cultural activities and folklore events: among them, the medieval commemoration ‘Volterra A.D. 1398’ held in August and the ‘Astiludio’, an impressive competition between flag wavers that takes place on the first Sunday of September.

But Volterra is also present in Italian and foreign literature: in addition to various films – to cite one: ‘Vaghe stelle dell’Orsa’ by Visconti – a book by Gabriele D’Annunzio, numerous volumes by Carlo Cassola and ‘New Moon’ by Stephenie Meyer have been set here, a fact that in recent years has attracted many young readers of the Twilight saga to the city.
If the city is full of interesting ideas for visits and walks, the surroundings are no less interesting: the countryside of Volterra is a triumph of round hills and meadows as far as the eye can see, beautiful in every season of the year. And how can we forget the geological formations that have a real unicum here? These are the famous ‘Balze di Volterra’ (Volterra crags), the chasms overlooking the surrounding countryside, formed as a result of the collapse of the layers of permeable yellow sands and surface that overhang the impermeable clay layers on which flow large amounts of water that undermine its stability: the result is simply spectacular.
Not far from Volterra there are other important places, including Larderello, with the most important geothermal center in the world and Montecatini Val di Cecina (birthplace of Montedison) with its copper mines now closed and an important Mining Museum.

The activities of the House

In the G.I.A.N. section of Volterra, the groups belonging to the Association are also the promoters of important activities:

The GIAN section that runs the house