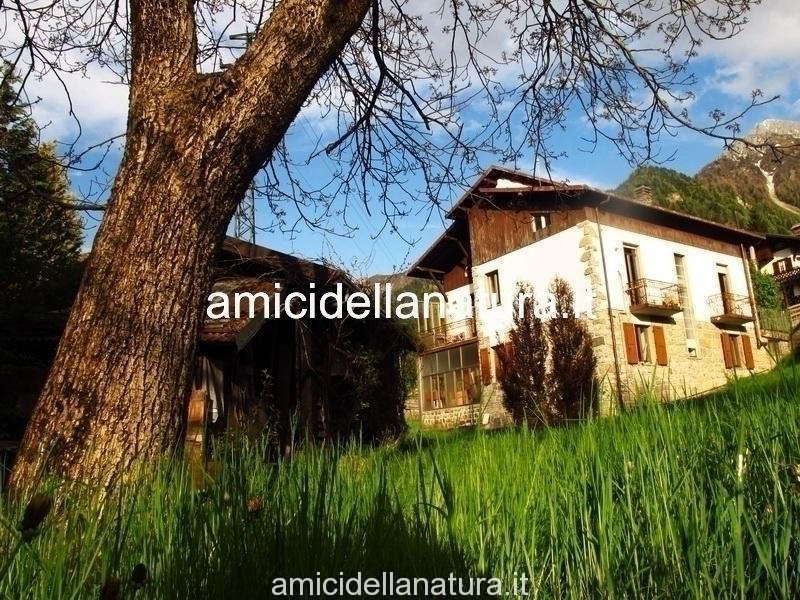 Description of the house

Cà di Ach Borns at the feet of Pizzo Camino, Saviore dell’Adamello’s satellite undertaking. In the house of Schilpario Marco and Maria, Sara’s grandparents used to live, today it’s a meeting place, a community and spiritual growing. Our dream is therefore transform an old house in a self-managed hangout not only fo the travelers but for valleys residents too, create a colored and animated place where stay, relaxing, living together and where let born ideas an put them in practice, it’s because the meeting with the other that one constantly can get new points of view.
The house offers around 12 sleeping accomodations divided in 2 dormitories with bunk beds, a hall with a chimney, a bathroom, a kitchen with all the essential, a supplementary ample room on request assigned for courses and various activities and a big garden which will be site of horticultural experimentation and relaxing area. Cà di Ach is endowed with a ramp for wheelchair users. Thanks to a co-operation with Proloco it’s possible rent a mountainbike and electric bikes. There’s also the possibility to place tents in the garden in the huge walnut’s shade.

SCALVE’S VALLEY borders with Valtellina, Valcamonica e Valseriana and it’s on the territory of the Province of Bergamo, the Valley expands for a breadth of 19 kilometres between a circle of mountains on the vertices of which stand out Massiccio della Presolana (2521 meters), Pizzo Tornello (2687 meters), Cimon della Bagozza (2409 meters) and Pizzo Camino (2492 meters).
The adventure already starts on the road which brings to the Valley, one can choose between Passo del Vivione, the hill from Passo della Presolana to see the Valley in its entirety, got stuck between the mountains (from there the celtic name Skalf, or rather split) or Via Mala which is in the live rock upon the cliffs of Dezzo river.
Cà di Ach is in Schilpario, one of the four Valley’s municipalities, it’s nestled by the ledge of Orbie Bergamasche and surrounded by a fir trees wood, indoor within which in winter twists and turns the cross counrty skiing track long 10 kilometers. Beautiful walks start exactly out of the house like the path which brings to Valle di Epolo, Pizzo Camino and the suggestive Corna Buca. Still in Schilpario there are Valle dei Campelli and the iron mines which with their narrow tunnels still today bring into the mountain.
We that belong to Cà di Ach think that the Valley offers many cultural and natural opportunities if it’s considered in its set, without stop us exclusively to Schipario but including in our excursions and adventures the others three municipalities too: Azzone with the natural reserve which is part of Parco del Giovinetto, Vilminore from which one can arrive till Diga del Gleno which still overlooks majestic with its crack which remembers the 1923’s disaster and Colere with its downhill tracks and its rock’s faces for rock climbing lovers.
Then there are lesser paths and less known, those are our favorite, in which we like bring who comes to visit us, small places where the heart feels at home.

Cà di Ach, which from the dialet in simple way it means “the house where things happen”, it borns as alternative proposal based on the values and principles of Amici della Natura. Here are some of our activities:

In addition to the various activities we also would like very simply that Cà di Ach be a meeting place, which valley’s people and not only feel free to spend the afternoon in the garden, without organizated activities, because it’s exactly when one lives space that the beautiest things happen spontaneously.
The various activities are kept by us, and other collaborators! So we are constantly looking for people who get will to share one of their passion, art or skill for a day, a week-end or repeated meetings.