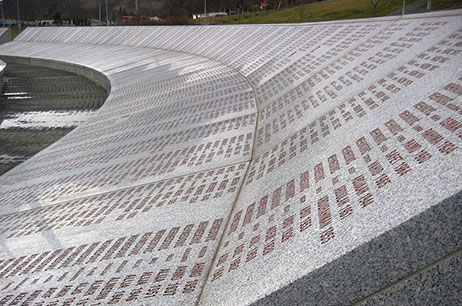 NF Italy is working to support a noble project which aspires to bringing the message, concerning sustainable tourism and the prospect of a prolific union between different cultures, in the Bosnian city of Srebrenica; city that has become sadly famous worldwide for the genocide happened in 1995. Before the war, Srebrenica was a place full of life, characterized by the many flourishing touristic activities linked to its renown thermal resources; with the advent of the war everything changed and still up to these days neither an economical nor a cultural rebirth has really begun.

Thanks to the meeting held on the 25th of October in Bozen, with the presence of the association Adopt Srebrenica, made possible by the Alexander Langer Foundation, NF Italy got the inspiration to provide support to the enthusiastic Bosnian youth, met in such occasion, to open a NatureFriends house in their city and to help them to build the NatureFriends Bosnian federation. Also Irvin Mujicic, another fellow Bosnian, who had emigrated in Italy in 1993 during his infancy together with his mother, has recently joined the project with great enthusiasm, thanks to the group of Naturefriends based in Saviore dell’Adamello which has introduced him to the Naturefriends’ network.

The trip to Srebrenica undertaken by the Italian delegation of NatureFriends, which took place in mid June 2016, really consisted in a first step in an exploratory attempt aimed to evaluate in loco the conditions and prerequisites necessary for the opening of a new NatureFriends house. We decided to invite to join our Italian delegation In this experience two other persons in particular, each of them as representative of another group of people that, like the Bosnians, has lived the horror of the genocide: Cecil Cross, prestigious elder representative of the Lakota tribe (from South Dakota – USA) and Geshe Lha Tenkiong, an exiled tibetan monk, who is currently living in Italy. Unfortunately the latter, was forced to renounce due to bureaucratic issues related to his own VISA permission.

After this trip the shared positive impression of Bosnia among the group of delegates was that of a country where green spaces prevail: countryside, mountains and plateaus, with very few highways and, with the exception of the capital, Sarajevo, and few other cities close to the border, a country composed by rural villages. However, the group is also seriously worried about a forthcoming phase of “apparent” development which is based in reality on an aggressive land consumption plan; it is in this perspective that we think the nascent Bosnian NatureFriends could and should be taking a strategic role for the preservation of the environment.

The prospect of the realization of a NatureFriends house in such territory seems to be promising, given that there already are three buildings which have been identified as available options:

The first two structures are owned by a private citizen who has expressed a strong interest in joining the NatureFriends network; especially with regard to the aforementioned chalet, “Ekosfera”, this person could seize the opportunity to promote also cultural activities, through the local association specialized in archeology (close to the house there is a Bougumil necropolis) which he is member of.

The third house, the one situated in Srebrenica, belongs to Irvin Mujicic. This building needs strong maintenance works, which could be managed by Irvin himself and the Adopt Srebrenica group that expressed the willingness to share its own venue as center for historical war documentation.

On a positive note, the initiative to build, with the knowledge and the guide of Cecil Cross, a tipi (the traditional native Indians conic tent), in a central zone of Srebrenica, that not only increases the number of people that can be hosted but also leaves a concrete sign that something new has come to the city, revealed to be a good idea. Our hope is for this place to represent a concrete symbol of dialogue and connection between people of different cultures too. During the construction of the tent lots were the people who came to assist and visit us, lots the strangers who were passing-by and stopped intrigued by our work. In the days immediately after we left, we were informed that the tent had been used as a meeting place for a sort of press conference to explain to the local journalists about the rising NatureFriends project in Bosnia.

During the trip the delegation has really matured the idea that the real resource of this project is the tourism: as it is right now, we think it is still only focused on the memory of the Potocari victims. We are confident that new visitors from all over the world could be interested in discovering the wonderful Bosnian natural sights: the ex-thermal area, Drina river, Bougumil necropolis, these treasures could stimulate the city of Srebrenica and its people in the direction of the so long sought cultural re-birth of the area. For all these reasons NF Italy is working to organize another travel in Bosnia in 2017 with a twofold aim: that is to discover the natural wonders that the city has to offer and also to arrange a work camp to help in the maintenance works for renewing the future NatureFriends house.